Gambia News flashbacks on the various ways former president Yahya Jammeh is purported to have killed Gambians beginning from the first months he sat on the country’s hot-seat.
This compilation is inspired by Ensa Keita’s TRRC horrific revelation of how exiled killer Sanna Manjang heartlessly hacked to death and chopped to pieces a Cassamance rebel Kajally and fed his body to the crocodiles.

1. SUMMARILY EXECUTION – The 1994 junta after only four months old in government, foiled a planned coup and, on the directive of Captain Yahya Jammeh “crushed” a “rebellion” at the Yundum and Fajara barracks. Coupists were captured tortured and killed at the Fajara Barracks, at the Brikama Nyambai Forest and buried at camps without being trialed. This move was inspired by Jammeh’s command to Sana Sabally “take no prisoners”.

2. BEATEN AND BURNT: – Erstwhile finance minister Koro Ceesay became the first civilian victim of the junta for threatening to expose their graft doings . Again the killing was ordered by Jammeh just before he travelled to Ethiopia. Edward Singhateh, then Minister of Defense, staged the killing at then lands and local governments cabinet minister Yankuba Touray’s residence. As narrated by self-confessed killer Alagie Kanyi, the unsuspecting Koro was lured into the room then battered to death with a pestle, fire woods and his remains burnt beyond recognition in concealment efforts at Jambur’s junction.

3. DRIVE-BY-SHOOTING: Deyda Hydara comes into sharp focus in 2004.The journalist was murdered by Jammeh’s commando thugs who hired a taxi for the “operation” again on the orders of Jammeh because the then president never liked the late Point Newspaper chief’s hard-hitting Horom Si column.
The hench men’s boss Nuha Badjie labelled the journalist “this is idiot” before urging his three men to shot at their unsuspecting victim. Jammeh gave them envelopes containing dollars for their jobs which at the time was the equivalent of D40,000 or there about.

4.SHOT AND DUMP IN WELLS: 33 Europe-bound Ghanaians were captured and on wrong intelligence report, presumed for “mercenaries” intent on uprooting Jammeh’s rule. Again, Jammeh ordered they be killed after Nuha Badjie spoke to him over the phone. One of the migrants gifted a 100 euros to one of the killers (Omar Jallow dubbed Oyaa) because he knew he will be killed anyways and asked to make a final prayer which he was not granted. One by one, 33 of them were shot at point blank range and dumped in Kanilai at Jammeh’s garden. Many others faced a similar fate.
5. SUFFOCATED TO DEATH WITH PLASTIC BAGS: 2006 Coup leader Colonel Ndure Cham was arrested and kept in Tanji then put in the custody of Jammeh’s hit-men who suffocated him to death with four plastic bags around the coastal road area and buried him at an unknown location. Former majority leader for parliament Baba Jobe was also suffocated to death at his hospital bed at RVTH in 2011. The Mile Two Prison Nine inmates were all suffocated too.

Two Gambian-Americans Mamut Ceesay and Ebou Jobe were slaughtered and buried after they were arrested. They were accused of treason. The duo were chopped to pieces and buried, according to killer Oyaa.

7.HUNG TO DEATH: Many others faced this sort of fate. A couple of Gambians were hung to death at around Yundum. Jammeh ordered his own brother Haruna Jammeh be killed. A rope was tied to his neck at the famous well in Kanilai with killers Alieu Jeng and Omar Jallow (Oyaa) holding on each end as Sanna Manjang commando-kicked his neck, killing him instantly.

8.KILLED WITH PISTOL AND AK47s: The likes of Daba Marena, Julia and Jammeh’s own blood sister Massey were executed with close range shots and their heads blown with either AK47s or pistols.

9. HACKED AND FED TO CROCODILES: If Ensa Keita’s revelation is anything to go by, Kajally faced and the most savage of deaths.

First, killer Sanna Manjang chopped Kajally’s neck then pierced the double-header cutlass to his stomach, running the blade to the upper body and splitting it into several parts prior to cutting the legs. Kajally’s tongues wagged noisily on the floor before Manjang stamped his boot on it then shoved his two fingers into the head to lift it off the ground and shoving it in a plastic bag to display it to Jammeh as a human trophy. Rest of the disfigured body was placed in a long bag and fed to crocodiles in Kanilai.

"You Died with Honour Not Kneeling...." Fatoumatta Sandeng all Emotional on Anniversary of Father Death's, Killed by Jammeh's Thugs

“Mandinka, Wollof Etc Should be Recognised in the Constitution,” 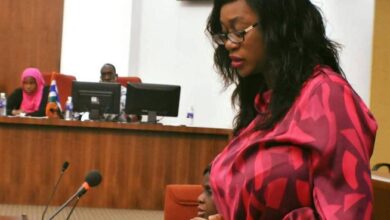 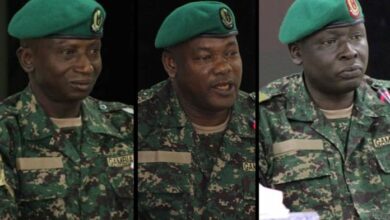 Gambian Guard Reveals How Jungulers Fished Out Prisoners for Execution

Gambia Goes into A Complete Week without Registering A Corona Case